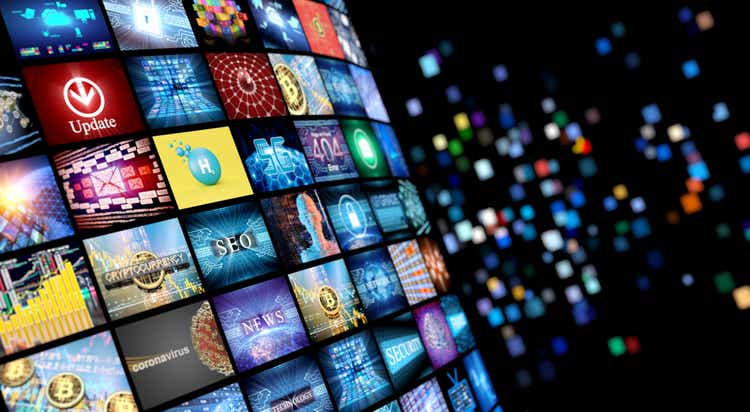 My last article on The Trade Desk (NASDAQ: TTD) was released as the stock traded at a price of $82.5 and a P/S ratio of 44x! The title of the article, Evaluation will take years Growth to catch up, probably already totally given the thesis. The stock has lost more than 43% of its price since amid a 10% correction in the overall market.

Combined with its sales growth since then, the stock is now at a much lower valuation with a P/S ratio of around 17.8x. So I decided to take another look, and my conclusion is that it’s still a prize for perfection. A simple projection on the back of the envelope shows that investment at this stage still requires a constant CAGR of 25% for the next 5 years or so to break even. Not quite impossible. But I consider a 25% CAGR over 5 years to be a perfect growth trajectory. To put it into perspective, its sales growth has averaged 29% CAGR over the past 5 years.

The short-term outlook is mixed. The company recorded a net loss of $0.03 per share in the first quarter, while revenue jumped 43% year-on-year, the strong growth of the past 4 years. The customer retention rate remains high and the new Solimar trading platform is successfully adopted. However, margins are under pressure and the company faces significant increases in operating costs, as we will see below.

Pressure on margins and operating expenses

As shown in the following chart, adjusted EBITDA was $121 million last quarter. That’s about $70 million less than the previous quarter, but about $50 million more than a year ago, quite a remarkable annual growth. However, the net profit turned red. Its GAAP net income was -$14.6 million, compared to a small positive profit of $8 million in the prior quarter and $152 million a year ago.

The company faces higher operating expenses. Even with the benefits of the virtual environment, operating expenses increased 30% year-over-year, as CFO Blake Grayson commented (abbreviated and underlined by me):

Driven by the sustained revenue performance in the first quarter, we generated $121 million of adjusted EBITDA, or approximately 38% of revenue. Adjusted EBITDA of $121 million represents a 72% increase over a year ago. In the first quarter, we continued to benefit from operating costs temporarily lower than forecast, partly due to the virtual environment. Now let’s move on to expenses. Excluding stock-based compensation, operating expenses were $207 million in the first quarter, up 30% year-over-year. We continued to see significant operating leverage as we grow the business and improve our efficiency.

Looking ahead, I see mixed prospects in the near future. On the one hand, I think the increase in operating expenses is probably due to the recent deployment of Solimar and the launch of OpenPath. On the other hand, these new platforms enjoy good adoption rates and the upcoming midterm elections could be a powerful catalyst, as detailed below.

Customer retention remains high (remarkably higher in fact) with retention rates above 95% in recent years. Customers are loyal to its unique capabilities such as connected TV and self-service omnichannel software platform. Going forward, the company will continue to focus on its CTV capability and rolling out new platforms. Solimar and OpenPath are two of the highlights. Solimar is its new trading platform and OpenPath will also allow advertisers to directly access their inventory. The upcoming midterm elections could serve as a powerful catalyst for its existing and new products.

Management reports encouraging results, as evidenced by the following Q&A during the first quarter earnings report (abbreviated and underlined by me). And they are aiming for a 100% adoption rate within a year.

Questions from Shyam Patil (SIG): …when we look at your results and outlook, they look much better than what we’ve seen from a lot of other ad-supported companies during earnings. Can you just talk about what you think is causing your outperformance? And then second question, can you tell us a bit about how you see the rest of the year going?

Responses from Jeff Green (CEO of TTD): And then, of course, in the second half, we will also have a midterm election…And we think it is – we are very well placed to have it be our biggest political year ever. Solimar is now more than 80% adopted. So we’ll finish that by the end of the year. So, in other words, we’re going to move everything to Solimar, the platform that we shipped on July 7 of last year. Go from launch to 100% adoption the following year is something we’re aiming for, but now we’re extremely confident we’ll hit.

Due to such a premium valuation, the market still expects a perfect growth trajectory, as you can see from my following back of the envelope calculations. This is what I call a reality check or common sense test. This is an estimate of the growth rate needed to achieve a target return on investment over the next five years. Sometimes we are so focused on the details of the operation (which are very important) that we forget to run a simple test based only on our common sense.

The red line shows the returns if its valuation remains constant at 17.8x. This is obviously the dream case for growth investors. The growth continues and continues to justify the valuation of the premium. Therefore, every percentage of growth translates into returns on investment.

However, it is very possible that its growth will slow down and its valuation will contract further. After all, the basic law of growth is that the bigger you get, the harder it becomes to grow bigger. If his P/S contracts to 10x, the level at which PLTR is currently valued and still a premium valuation, his return scenario is represented by the blue line. As can be seen, if this contraction were to occur, the business would need to grow sustainably at a CAGR of around 13% for the investment to break even in 5 years – a very reasonable growth rate. . However, if the P/S normalizes at 6x (beware, still 20% above GOOG and around 2x of the overall market), then the business must grow sustainably at ~25% CAGR for the investment to reach the threshold profitability in 5 years. To put it in perspective, its sales growth has averaged 29% CAGR over the past 5 years and I consider the past 5 years to be its stage of exponential growth.

Final thoughts and other risks

After shrinking from a P/S ratio of 44+ to the current level of around 18, TTD’s valuation bubble has largely deflated. His financial situation is also a plus. It is debt free and has more than $1.1 billion in cash on its ledger as of the March quarter.

However, under current conditions, the investment has a reasonable chance of breaking even or even generating a positive return if growth slows and the valuation contracts (say to 10x P/S). Although the 17.8x valuation is still high. For me, such a valuation still implies a perfect growth trajectory of around 25% CAGR for the next few years.

Besides valuation risk, there are a few other risks worth mentioning. As mentioned above, I expect margin and operating cost issues to persist for the foreseeable future. Macroeconomic uncertainties are also considerable. Based on the earnings of other top stocks like JPMorgan Chase (JPM), there is a good chance for a recession. The price of TTD’s share could be particularly sensitive given the historical volatility of its valuation and the nature of its activity.