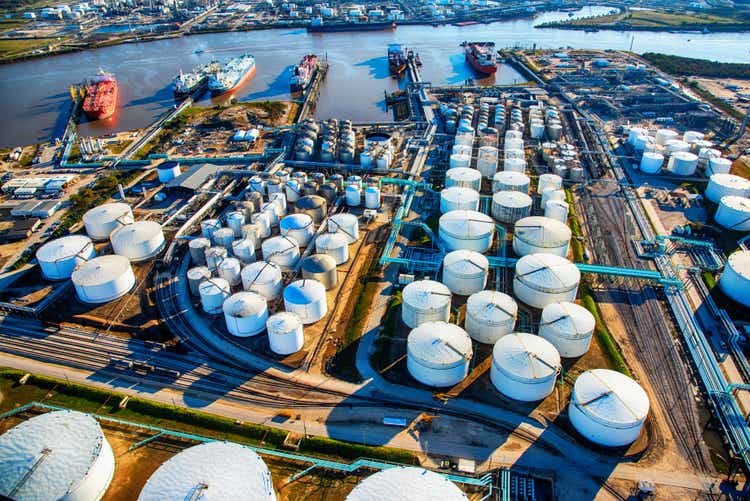 Enterprise Products Partners LP (NYSE:EPD) is a rare find for income investors. Rarely can you find the combination of world-class assets managed by a management team that excels in operations and capital allocation.

The strengths of EPD

EPD’s assets are diversified but integrated. First, geographicallyas shown on the map below:

And second, throughout the intermediate value chain:

While all of EPD’s operations are subject to general economic cycles, timing differences between individual product cycles ultimately result in more stable cash flows than its less diversified counterparts.

About half of EPD’s capital spending in recent years has focused on its upstream business. Its upstream investments, such as its recent $3.25 billion investment acquisition from Navistar Midstream Partners, are an inexpensive way to increase throughput volumes in its integrated midstream system.

The other half of EPD’s capital expenditure over the past few years has gone into expanding its petrochemical business. These are multi-decade investments such as EPDs expansion its export capacity for ethylene and ethane and its intended $5 billion steam cracker project. Petrochemical cash flows tend to be less volatile than upstream oil and gas cash flows. They therefore benefit from a premium valuation compared to upstream-oriented intermediary activities. In addition to cash flow stability, EPD’s increasing concentration in petrochemicals could benefit unitholders over time through a higher trading multiple.

EPD’s large growth investments consumed most of its cash flow. As a result, EPD has regularly operated with a cash deficit. The assets that EPD created through its capital expenditures were offset by increases in debt.

An exception was in 2021, when relatively lower investments resulted in excess cash, some of which was used to pay down debt.

In many cases, the presence of a sustained cash shortfall that is being met by issuing debt would be cause for concern. In the case of EPD, however, low-cost debt is used to finance low-risk, high-return projects, so we are not concerned with the company’s cash shortfall.

EPD’s results on a unit basis have shown similar consistency to its company-wide results over the past few years.

EPD’s high-quality assets and strong and growing cash flow have resulted in steady increases in distributions since its IPO in July 1998. The company halted the increases in 2020 but resumed them in the fourth quarter of 2021.

We expect the payout increases to continue as the company reaps the rewards of the capital investments of the past few years.

EPD has been cautious in managing debt maturities, regularly refinancing short-term maturities at attractive rates. Most of its debt matures in five years and beyond.

EPD’s leverage has remained reasonable over the past few years. Its leverage ratio stood at 3.4 times at the end of the first quarter. Leverage ratio trends are shown in the chart below. Note that EPD’s level of net debt at the end of 2021 was flattered by a large reserve of cash which it used to finance its acquisition of Navitas.

Liquidity at the end of the first quarter was more than adequate at $3.9 billion.

The flip side of EPD’s strong insider ownership is that it is less influenced by its public unitholders and industry peers. In fact, the catch against EPD in the market is that its management listens to the preferences of its public unitholders. For example, he largely resisted calls for increased unit buybacks. Since 2020, EPD has only repurchased $400 million in units, an insignificant amount compared to its market capitalization of $51.5 billion. EPD has also bucked the industry-wide trend of dampening growth investing following the 2020 downturn. To the extent these results are disadvantageous to EPD unitholders, we believe this is a low price to pay for management that has one of the best long-term track records in the industry.

Our valuations use average intermediate multiples. The EPD could deserve a higher multiple due to its high quality and reorientation towards petrochemicals, so there is an upside to our valuation.

In our valuations, we assume that EPD pays down $250 million of debt in 2022 and 2023 and does not buy back any units. Free cash flow and adjusted EBITDA grow 4.0% annually, while distributions grow 3.5% annually.

From a cash flow multiple perspective, we value EPD Units at $29.85 in 2022. Including distributions, the Units offer a total return of 30.2%. Total return increases to 76.1% by 2026, primarily due to distributions.

Our discounted cash flow valuation yields a similar result. It assumes that our estimate of EPD free cash flow for 2022 remains stable for the next ten years and values ​​the units at $29.79, which is a 24% upside from today’s price.

EPD unitholders can rest assured that the company can weather any storm that comes its way, whether it results from turbulent energy markets or an economic downturn. Company-wide cash flow will be maintained even under the most adverse conditions. For example, its cash flow was flat during the severe recession of 2020.

Unitholders buying EPD today can go further and secure a 20% margin of safety between the current trading price of EPD and our target price. Add in the 7.75% return of the EPD and we’re struggling to find a better overall package for income investors. We value EPD units for purchase and believe they should be an integral part of any income portfolio.

BOQ stock price is now being watched in June, here’s why