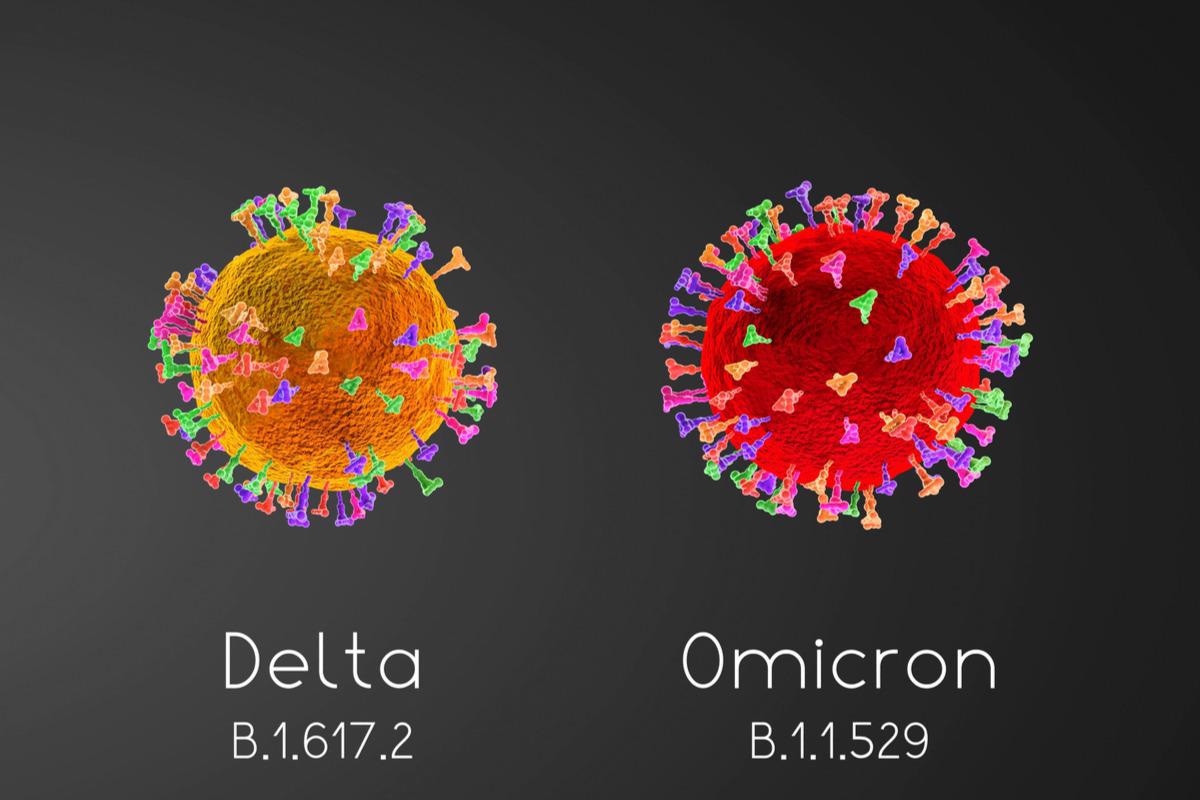 In a recent study published on medRxiv* preprint server, researchers in the United Kingdom (UK), conducted an epidemiological cohort study to assess differences in transmission of Omicron and Delta variants of severe acute respiratory syndrome coronavirus 2 (SARS-CoV-2) in England.

In England, the SARS-CoV-2 Omicron variant (B.1.1.529) became dominant and quickly replaced the Delta variant (B.1.617.2) in January 2022. Studies have found that compared to other SARS- CoV-2 variants, the Omicron variant is linked to increased transmissibility and reduced vaccine efficacy.

In the present study, researchers used secondary attack rates and household clustering to assess the transmissibility of Omicron and Delta variants at the time both variants were circulating in England.

The current study was carried out between December 5 and 11, 2021, in England, when the Omicron and the Delta were cocirculating. Positive SARS-CoV-2 results were reported by National Health Service (NHS) laboratories to the UK Health Security Agency (UKHSA). Lab reports with Lateral Flow Device (LFD) test data were stored in UKHSA’s Second Generation Surveillance System (SGSS).

Vaccination data for COVID-19 in England was taken from the National Immunization Management System (NIMS). Data from SARS-CoV-2 positive people was sent for contact tracing with nationally collected data (NHS test and trace records) and assessment of transmission to named contacts was performed using this data. Two or more SARS-CoV-2 positive cases in the same residential dwelling with identical Unique Property Reference Numbers (UPRNs) were defined as household clusters.

During the study, researchers observed an average of 2.0 contacts per case for the Delta variant and 1.7 for the Omicron variant, of which 1.6 and 1.1 were household contacts and 0.4 and 0.6 non-household contacts for Delta and Omicron, respectively. When exposure was inside and outside the household, the median serial interval of a secondary case was four days and three days for Delta and Omicron, respectively.

Cycle threshold (CT) values ​​were ≤ 30 days for a nucleocapsid and open reading frame (ORF) 1ab gene in Delta cases (98.7%) and Omicron cases (99.2%). Among named household contacts, the unadjusted secondary attack rate for Omicron and Delta was 15.0% and 10.8%, respectively, while for non-household contacts it was 8.2% and 3, 7%, respectively.

The team noted that for Omicron cases the overall risk ratio of transmission to household contact was 1.48 and for non-household contacts 2.14 compared to Delta cases. In non-household settings, for contacts exposed to Delta who received three doses of vaccines, secondary attack rates were 3.0% versus 5.1% in unvaccinated contacts. Similarly, in households, it was 7.6% versus 12.9%, respectively.

When the number of vaccination doses was reduced from three to no doses, transmission outside households was 3.1% versus 4.9%, respectively, while within households it was 6.2% versus 11.8%, respectively. The similarly adjusted transmission risk for non-household cases who received the third dose of vaccine was 0.51 compared to two doses, while for household contacts the ratio was 0.68.

The team analyzed that in the home setting, people who received three doses had a protective adjusted risk ratio in contacts (0.88) or exponents (0.78) compared to two doses. While in non-household contacts it was 0.76 while no difference was seen in exponents.

The team observed that the risk of household transmission was lower in all other age groups, particularly children compared to contacts aged 30-39 (except 40-49), men (compared to female contacts) and exhibitors under 30 (compared to exhibitors aged 30-79). In exposing non-family contacts. under 20 years old were less at risk of transmission than 30-69 year olds.

For the Omicron variants, the overall risk of household clustering was 3.54 compared to the Delta variants. Additionally, depending on vaccination status, particularly in index cases that were ≥ 14 days after the third dose of vaccine, there was an increased risk of household clustering in the Omicron variant compared to the Delta. Additionally, the team observed that the index cases of younger cases ( 40 years old and the white ethnic group, respectively.

In the restricted model, including people with a history of travel outside the UK, there was an overall adjusted odds ratio for household clustering of 4.53 for Omicron index cases compared to 4 .51 in Delta, while no significant change was noticed in the pattern excluding cases with a history of outside travel. Great Britain.

The study highlighted the need for genomic surveillance to identify and understand the impact of newly emerging SARS-CoV-2 variants on hospitalizations, illness incidents and deaths and to accelerate public health interventions like the deployment of booster vaccination for these emerging variants.

medRxiv publishes preliminary scientific reports that are not peer-reviewed and, therefore, should not be considered conclusive, guide clinical practice/health-related behaviors, or treated as established information.